(Are you into parfaits? Next time try this strawberry lemon parfait that’s made with macerated strawberries and lemon curd. So good!) 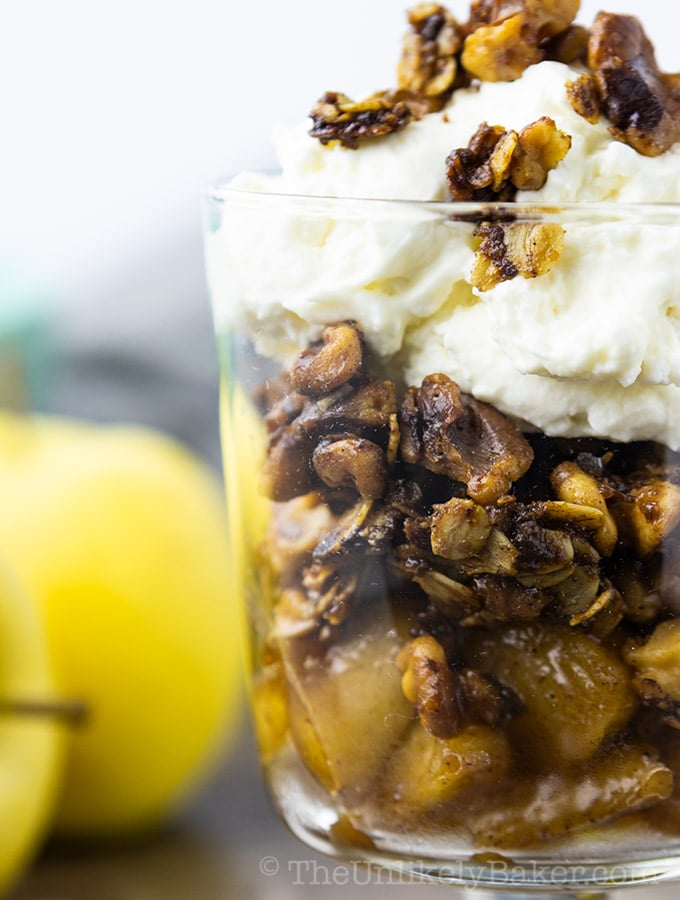 To continue our No Bake Summer Series, today we’re making apple parfait. And while the recipe does involve a little baking, it’s quick and worth it!

Parfaits are one of those desserts that nobody ever suspects are such a breeze to make.

And if you’re serving it at a party, you can even get everyone involved by making all the components ahead of time for a make-your-own-parfait bar. Fun!

What is an apple parfait? 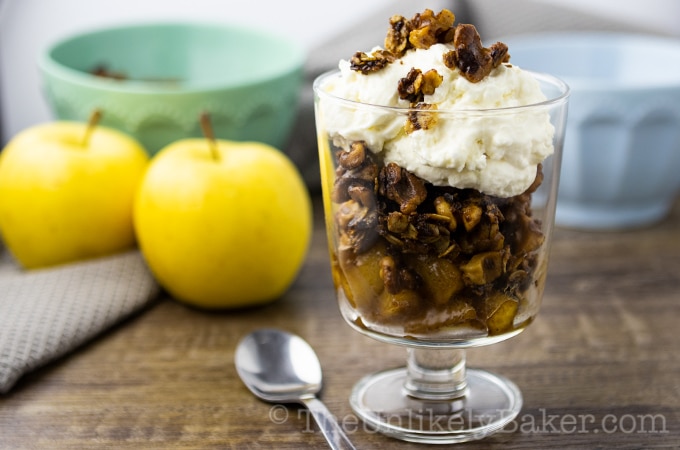 Traditionally, parfait (which is a French dessert), refers to a frozen dessert made from sugar syrup, egg, and cream to form a kind of custard. This kind of parfait is not necessarily served in a parfait glass, which is how we (most people?) imagine parfait to look like.

The parfait that we’re more familiar with is a layered dessert. The layers usually consist of fruit and whipped cream or ice cream (or sometimes yogurt for breakfast), and whatever else your foodie heart desires.

For this apple parfait recipe, our layers are made of soft caramel apples, crunchy cinnamon crisp with walnuts and rolled oats, and homemade whipped cream.

How to make caramel apple parfait 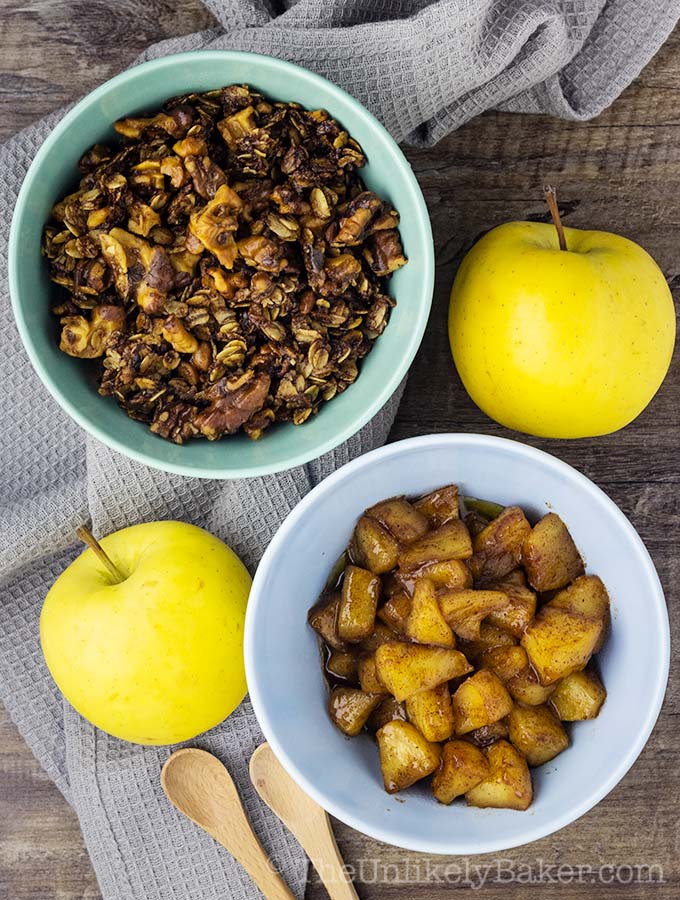 Making each component is easy (for the detailed recipe, please scroll to the bottom where you will find a printable recipe card).

Combine apples, unsalted butter, brown sugar, cinnamon and salt in a skillet on medium heat. Stir until the butter has completely melted.

Continue cooking until the apples are soft (but not mushy) and the sauce thickens. This step usually takes about 15 minutes for me. Remove from heat and set aside.

To make the cinnamon crisp: in a large bowl, stir rolled oats, chopped walnuts, cinnamon, cardamom, salt, brown sugar and melted butter until everything is combined.

Transfer the crisp to a baking pan lined with parchment paper and bake for 15 minutes. Stir then bake for another 15 minutes. Remove from the oven and set aside.

You can top your parfait with ice cream or whipped cream.

I prefer making my own whipped cream, which is simply whisking heavy cream, vanilla and sugar together.

It tastes better than ready-made whipped cream and so easy to do.


How to assemble apple crisp parfait

If making the apple parfait components is easy, assembling it is fun (check out the video).

I follow a simple rule when assembling parfaits – I like my layers to be as even as possible. This doesn’t only make it more visually appealing, you also get the perfect spoonful each time.

For apple parfait, I start with caramel apples, then the cinnamon crisp, then the whipped cream. You can sprinkle more crisp on top if you like. Or drizzle it with salted caramel sauce.

This dessert tastes a lot like deconstructed apple pie so if you’re ever in the mood for apple pie a la mode but don’t feel like dealing with baking the crust and all that jazz, make this apple pie parfait instead! 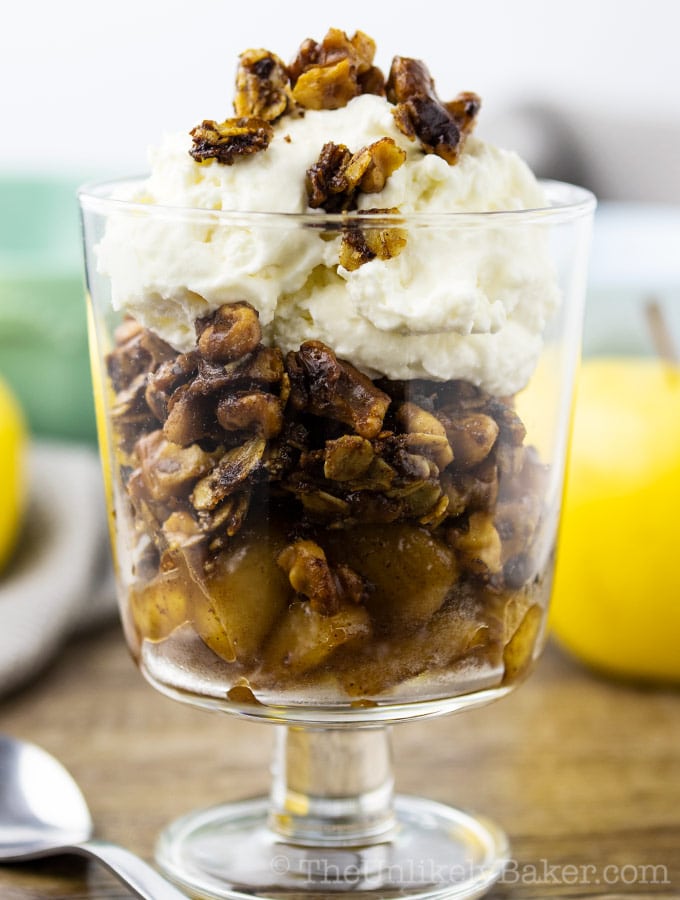 Here are some common questions about this recipe that I’ve been asked. Hope it helps you make your perfect parfait.

What is the best kind of apple to use for baking and desserts?

When picking the kind of apple to use in your baking or dessert recipes, keep in mind that the best variety is sweet as well as tart and, more importantly, firm and crisp enough so it doesn’t turn into mush when you bake it (unless that’s the goal, of course).

My default is granny smith apples. They are crisp and bake really well. They are also more on the sour side and that provides a nice balance for desserts.

You shouldn’t limit yourself to just one apple variety though.

In this recipe, I’ve used golden delicious apples, which are firm, crisp and have a perfectly sweet-tart taste. They also have the necessary acid content and stability for baking.

So go ahead and experiment! Mix and match until you find your favourite, tastiest apple combination.

Can I use canned apple pie filling?

I always use fresh apples when making apple parfait but ready-made apple pie filling should work in a pinch.

Just be aware that canned filling has lots of added sugar and cornstarch so it will affect the overall sweetness and texture of the parfait. Adjust the rest of the recipe accordingly.

Can I substitute ready-made granola for the cinnamon crisp?

If you want to make this recipe 100% no-bake, you can substitute ready-made granola for the walnut oat cinnamon crisp.

An apple a day makes me happy! Here are other delicious apple dessert recipes you can try: 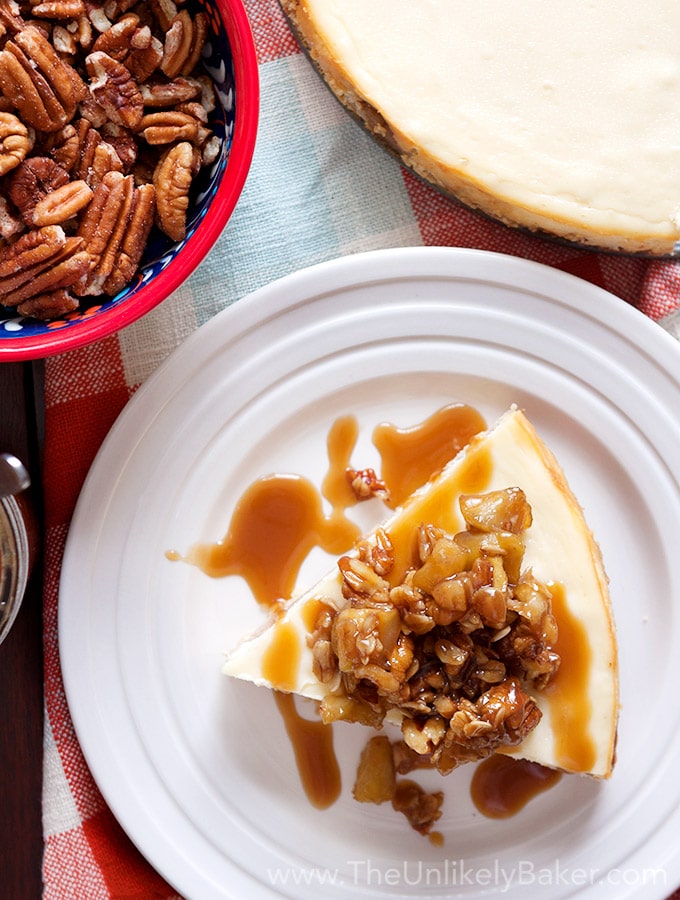 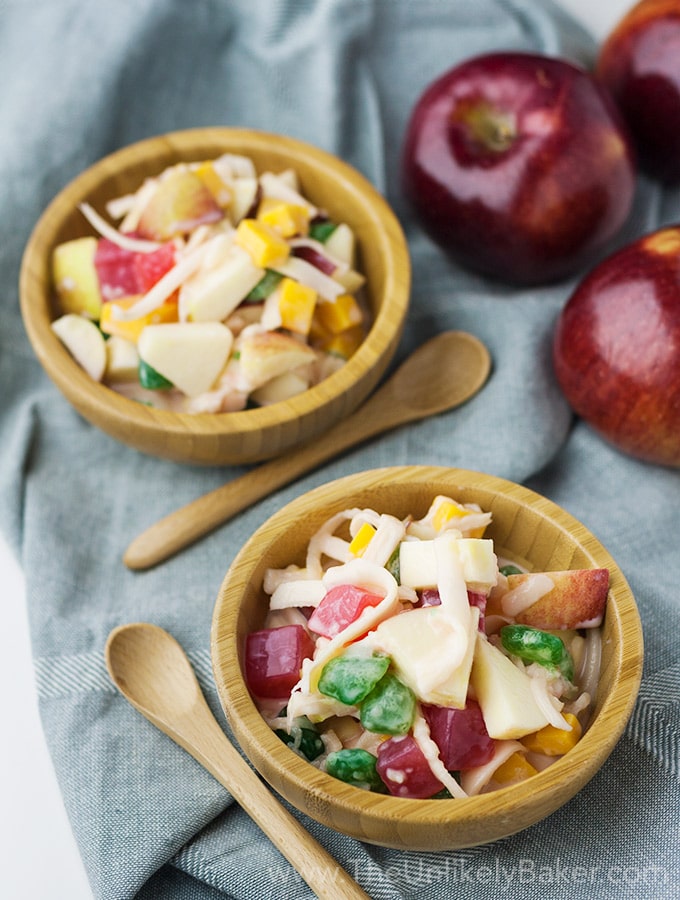 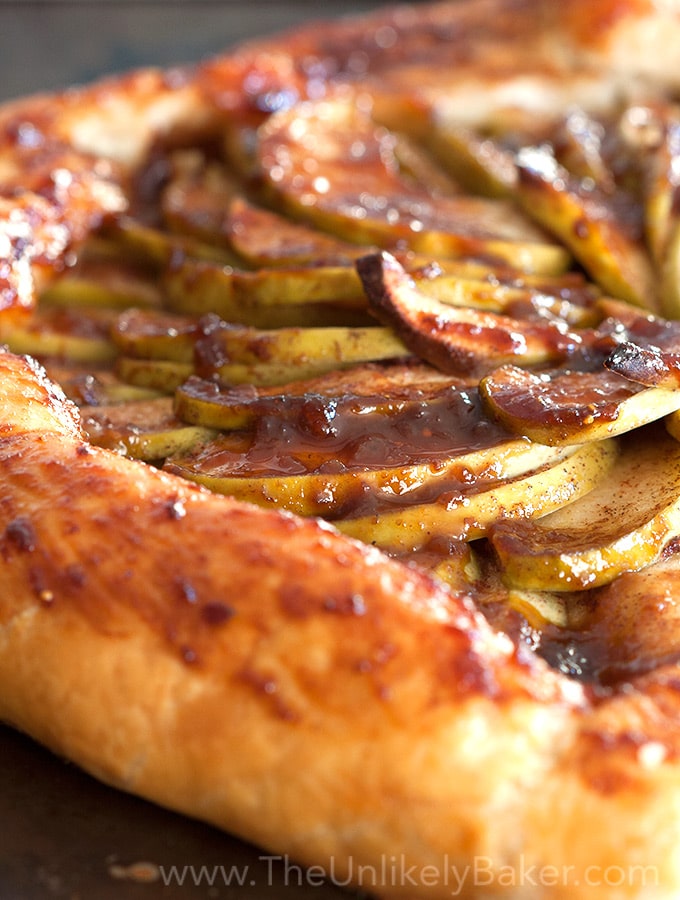 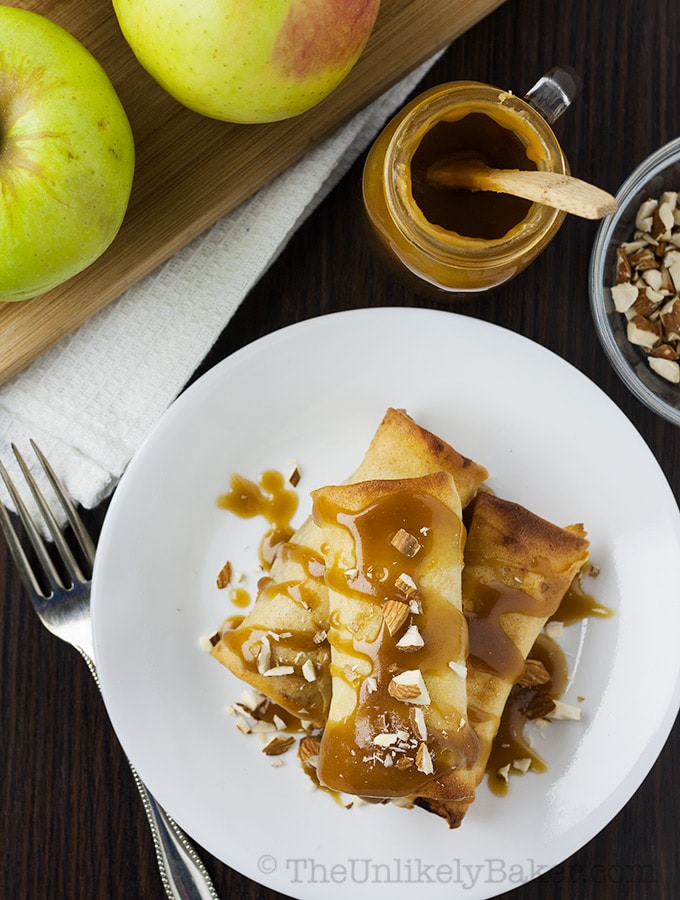 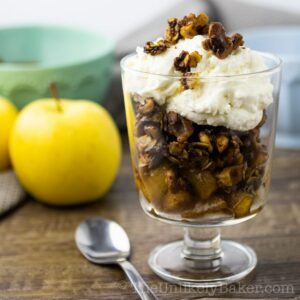 For the Caramel Apple Filling

For the Cinnamon Crisp

Did you make apple parfait? I’d love to hear from you in the comments section below. 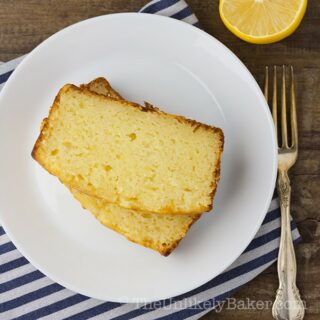 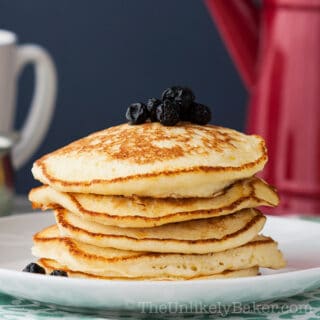 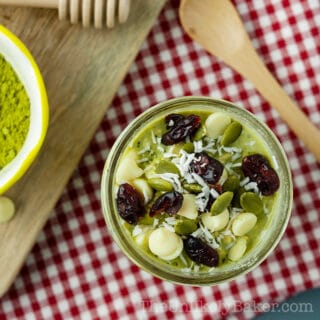 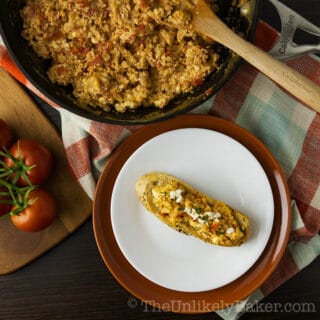 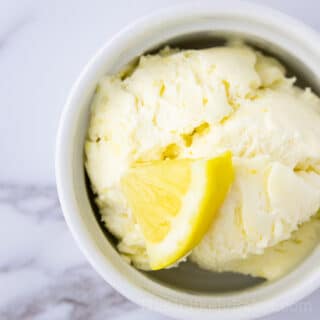 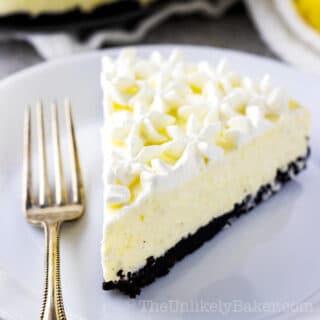