This site contains affiliate links. As an Amazon Associate I earn from qualifying purchases. See Terms of Use for more information 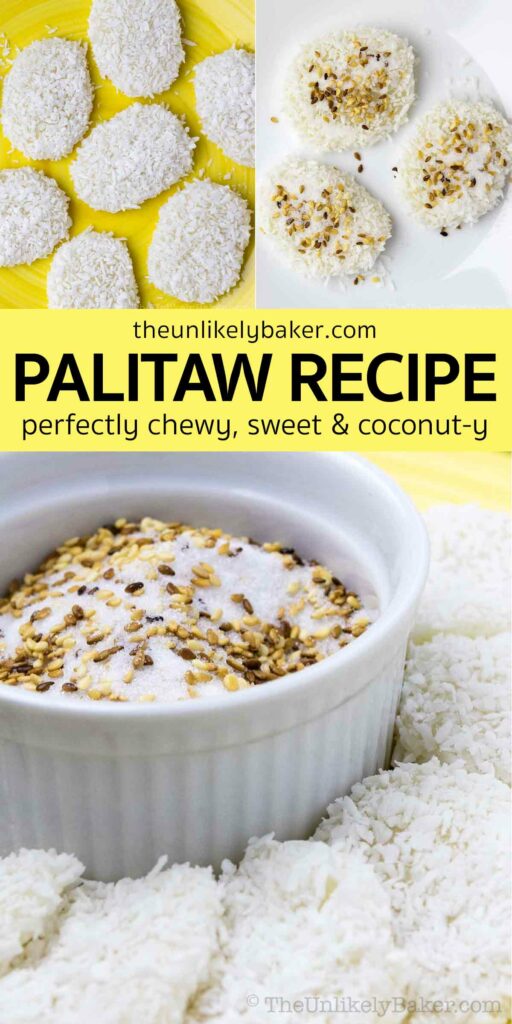 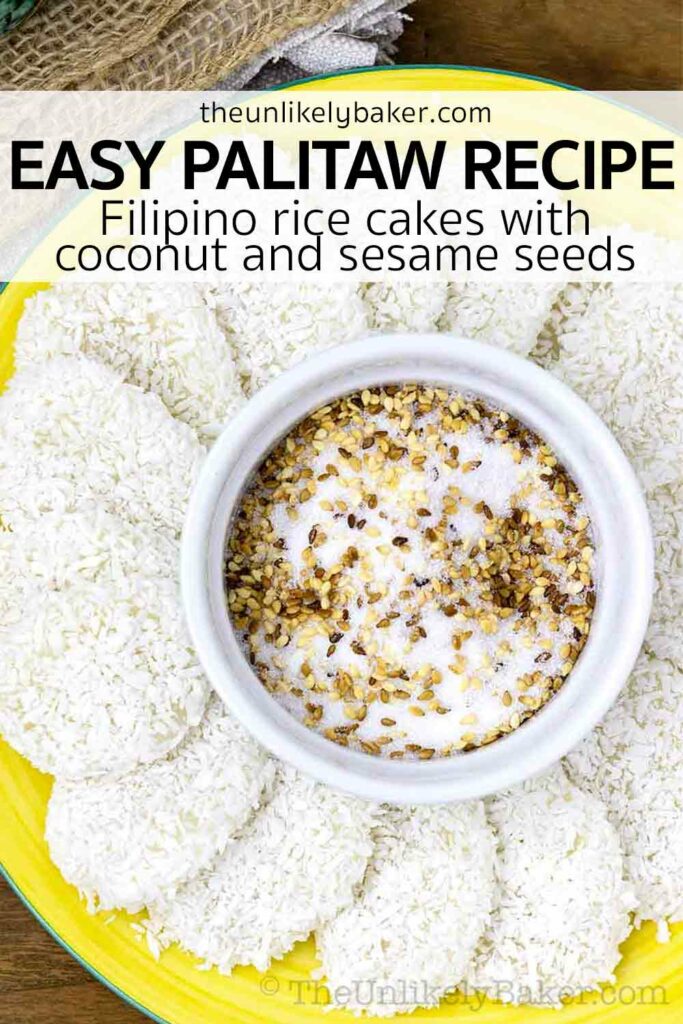 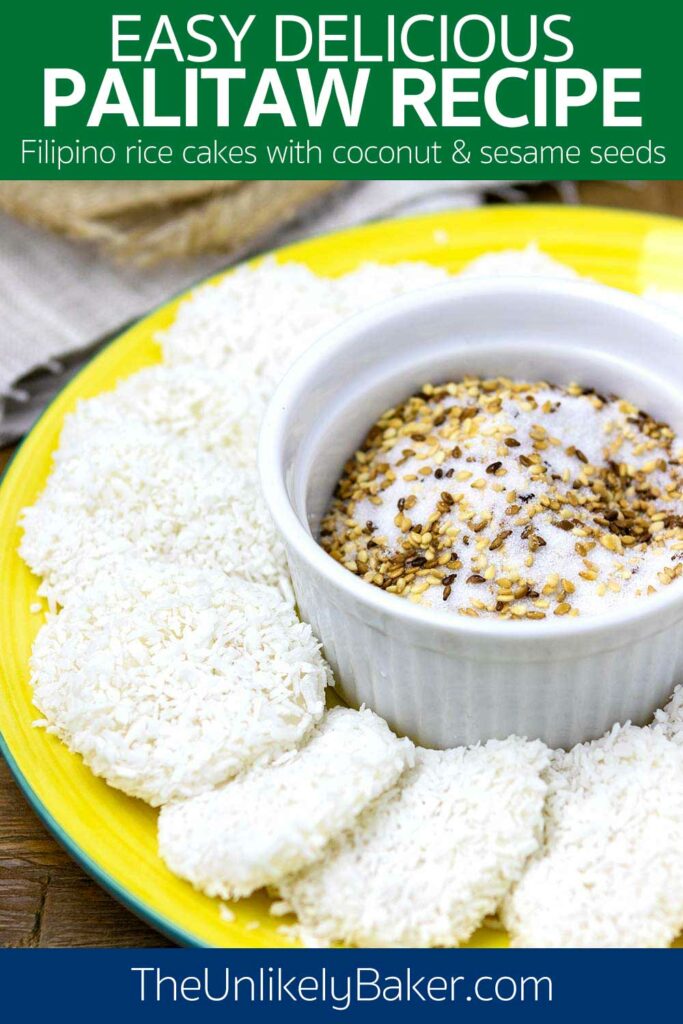 Try this palitaw recipe for delicious, authentic, easy-to-make palitaw that tastes just like the ones from home. Perfectly chewy, sweet and coconut-y, you’ll keep coming back for more.

Palitaw is a popular rice cake in the Philippines. They’re boiled, rolled in coconut then sprinkled with sugar and toasted sesame seeds.

It’s available everywhere — the local market, your favourite street vendor — though my favourite memory of palitaw is when my cousins and I would make them with our grandma.

Lemme tell you, rolling rice balls is a fun thing to do on a Sunday afternoon!

It’s still fun to do now that I’m all grown up and living far (too far) from home. Happily, I can find palitaw ingredients easily here so it’s quick and convenient to make whenever the craving hits.

Palitaw in english loosely translates to “to appear” or “to show”. And this snack is named that because you’d know they’re cooked when they float to the top of your pot. Once they appear, they’re done!

Traditionally, palitaw is made from rice grains soaked in water, ground, made into a dough, which is then formed into circular cakes.

Not a lot of people do this anymore though because you can easily buy glutinous rice flour (sometimes called sweet rice flour) in the supermarket these days.

And while palitaw is enjoyed as an everyday snack or merienda, you’ll also often see it served on special occasions like Christmas, especially on New Year’s Eve.

Filipinos believe it’s good luck to serve and eat something sweet, for a bountiful year ahead, and something sticky, so that loved ones stay close.

Regardless, I love palitaw because they’re delicious.

Why this palitaw recipe works

And you’ll love making this palitaw recipe too.

My recipe is palitaw with desiccated coconut or unsweetened shredded coconut (sometimes I also use medium coconut). They’re the most commonly available here so that’s what I always use. They’re also the best for extending the shelf life of palitaw.

A melon baller and a slotted spoon do come in very handy.

2 DOUGH. In a large bowl, combine glutinous rice flour and water and knead until it comes together in a soft, smooth, pliable dough.

3 ROLL AND FLATTEN.  Scoop and roll the dough into small balls using your hands then flatten into an oval about 1/4-inch thick.

4 BOIL. Drop each palitaw into a pot of boiling water and cook until the palitaw floats to the surface. Repeat until you’ve cooked all of the rice cakes.

5 DRAIN. Scoop the cooked palitaw using a slotted spoon and drain well by placing on a sheet of parchment paper. Space evenly so they don’t stick together.

6 COAT. While still warm, coat the palitaw in shredded coconut.

7 SERVE. And when ready to serve, sprinkle with your sugar-sesame seed mixture. Enjoy!

Tips for making the best palitaw every time

Simple and straightforward, right? Here are more tips to make the method for making palitaw that much easier.

Got questions about ingredients, storage and more? Find the answers here.

Its texture is very similar to mochi but softer. The rice cake itself is bland. It gets all its flavour from the coconut coating and the sugar-sesame seed topping.

What is kakanin in english

Palitaw is a popular Filipino kakanin. The word “kakanin” is derived from “kanin” or cooked rice and “kain” or eat. It’s a general term used for Filipino delicacies made with sticky rice or glutinous rice flour.

What is glutinous rice flour

And don’t let the fact that it’s sometimes called “sweet” throw you off either. It’s not sweet at all. It has a very mild, milky flavour. You can read all about glutinous rice flour here.

Here’s a really informative article if you want to know more.

Is glutinous rice flour the same as mochiko

Mochiko is a common type of glutinous rice flour and often used in Japanese cooking.

There are common glutinous rice flour substitutes when used as a thickener, like cornstarch and potato starch. For baked goods, tapioca flour is also commonly used.

I haven’t used any of them when making palitaw so I can’t say how they will affect the recipe. I recommend sticking to glutinous rice flour in this case.

What is rice flour in Tagalog

Rice flour in Tagalog is “harina sa bigas”. But like I said, there are many kinds of rice flour so make sure you’re buying the correct one needed for your recipe.

If you used freshly grated coconut to coat your palitaw, you should consume palitaw the same day they’re made. Fresh coconut tends to go stale quicker and palitaw coated with them spoils quicker too.

However, this palitaw recipe uses dried shredded coconut and that helps keep the palitaw fresher longer. Kept in the fridge, it should last up to a week.

How to store palitaw

To store these Filipino sweet rice balls, coat them in shredded coconut then keep them in an airtight container or a platter wrapped snugly in plastic wrap.

When ready to serve, microwave for 20-30 seconds then sprinkle with sugar and sesame seeds.

They will be perfectly chewy and delicious. I personally prefer 2-day old palitaw; it achieves that perfect texture I’m looking for.

Rice is a big part of Philippine culture so it’s no surprise that we eat it for breakfast, lunch, dinner and dessert! Here are more Filipino rice flour recipes and glutinous rice recipes you can explore.

Desserts made with rice flour

And check out this collection of recipes for Filipino desserts. 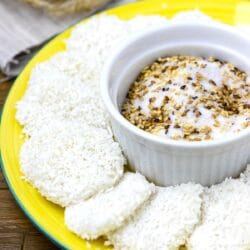 Did you make this glutinous rice flour dessert? I’d love to hear from you in the comments section below.

Wow! Palitaw is one of my favorite Filipino merienda, and I love it being served as a bit warm.

Me too! And I can eat many many many pieces of palitaw in one sitting lol!

Palitaw is my favorite among the "kakanins." I actually made some a few weeks ago. Yum!

This filipino rice cakes looks delicious I would love to check it out as coconut and seasme seeds are my favorite.

Oh my goodness! These Filipino rice cakes look so inviting! A must make recipe!

I love trying the cuisine from other countries. These rice cakes look and sound so delicious !! 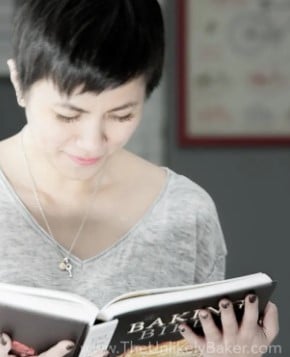