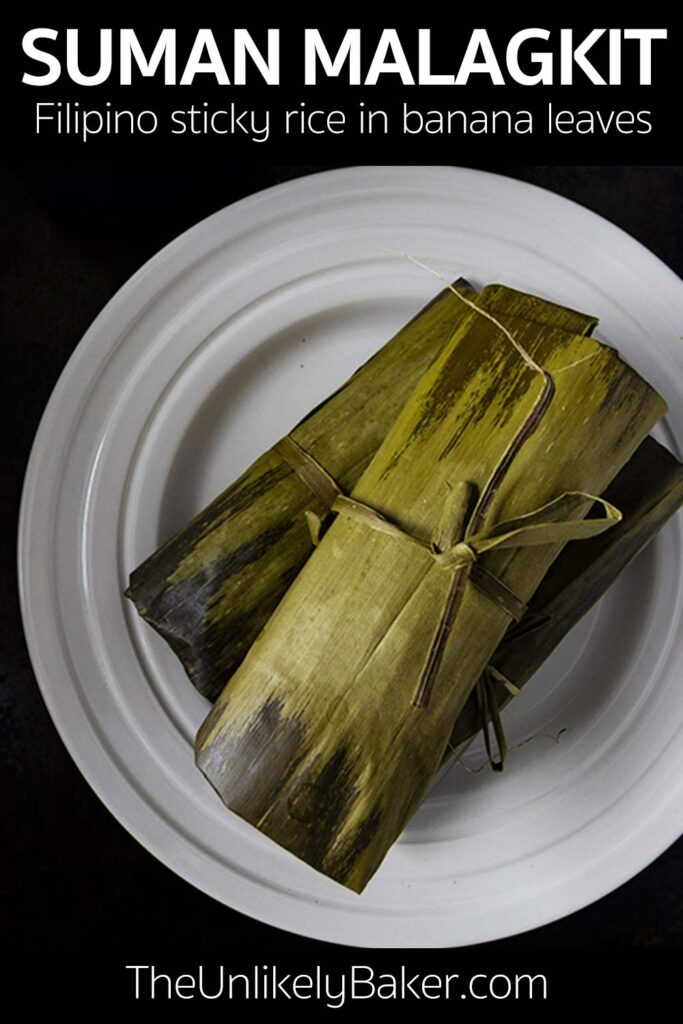 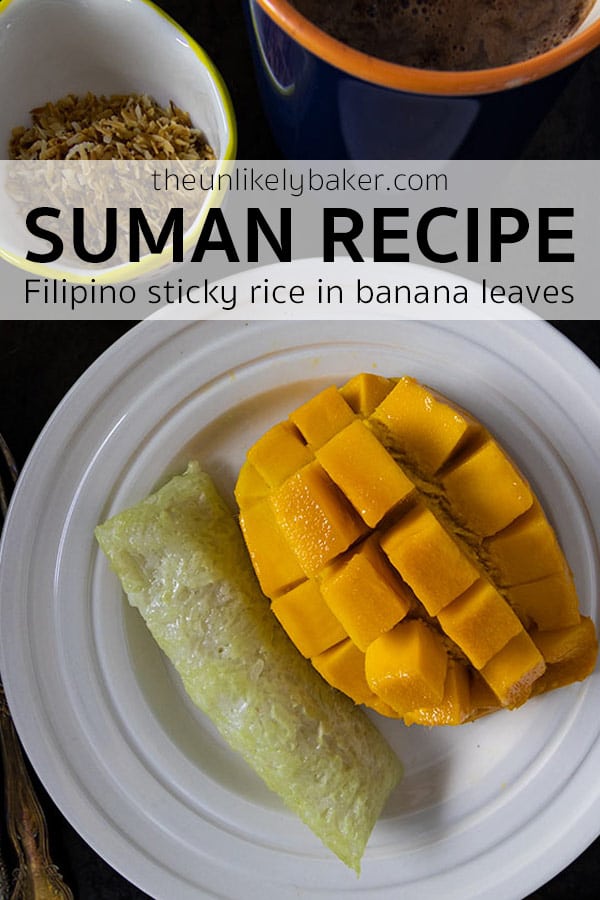 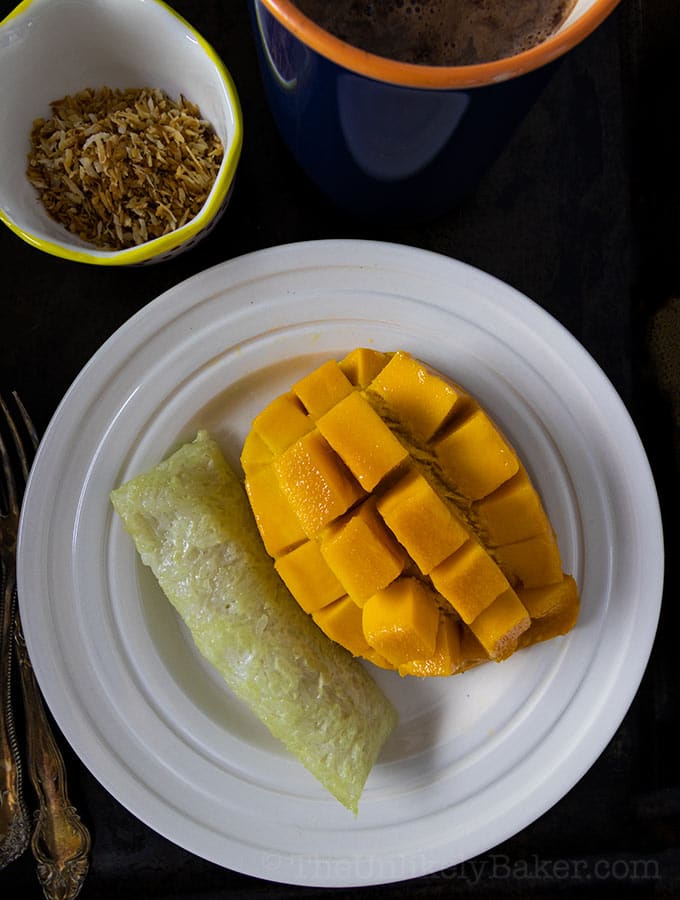 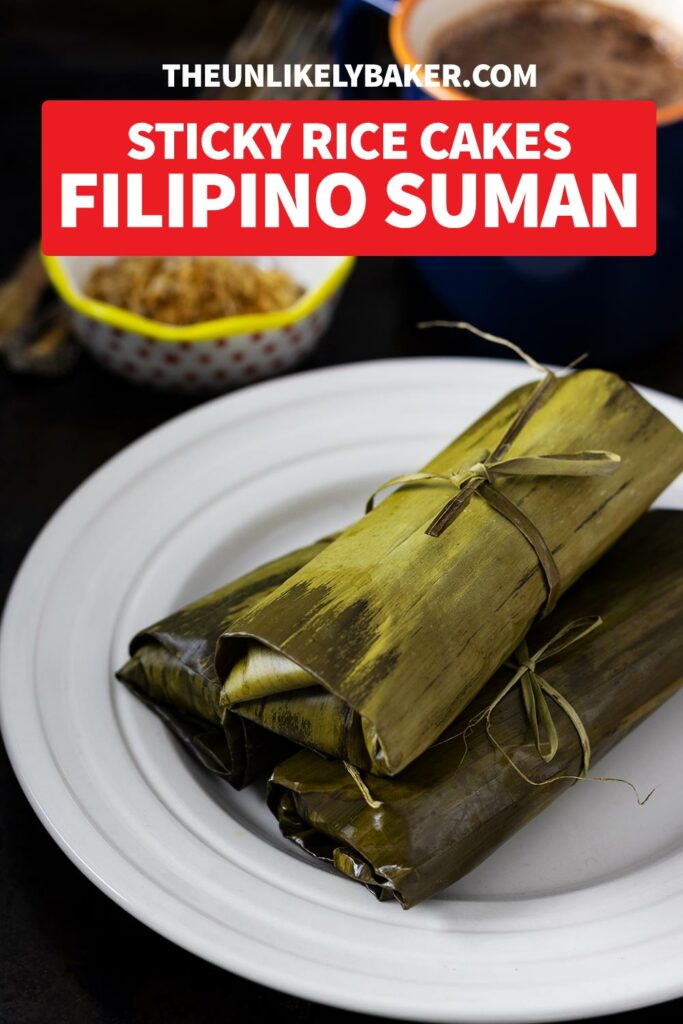 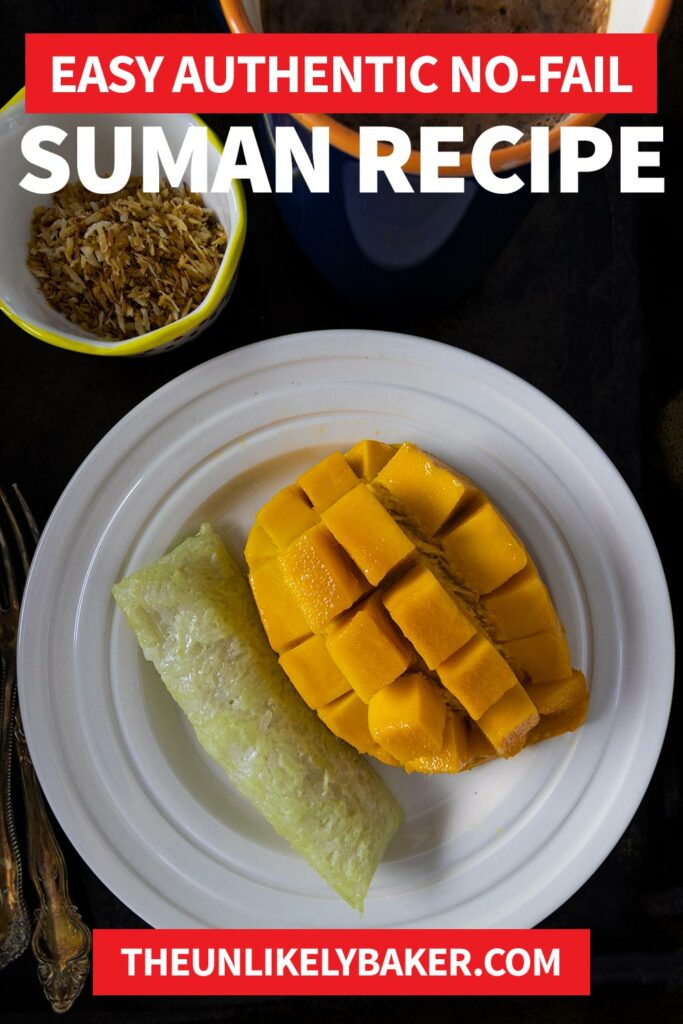 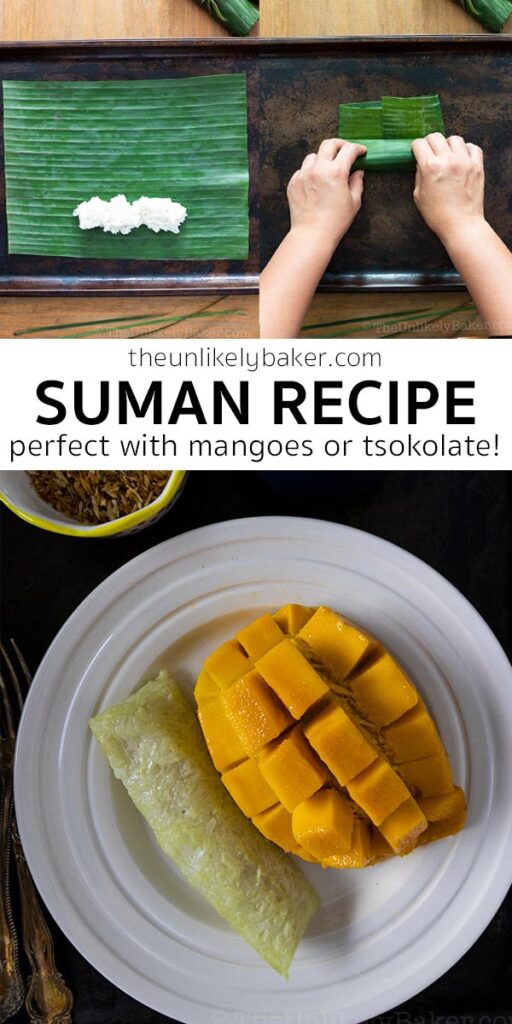 Suman is a Filipino snack (or merienda) that’s made of glutinous rice and coconut milk, wrapped in banana leaves and steamed to sticky perfection. Eat it with mangoes in the summer or dip it in tsokolate in the winter. Delicious!

(To learn how to make tsokolate or Filipino hot chocolate, check this out. Tsokolate is simple and straightforward but its intense chocolate flavour will win you over. Puto or Filipino steamed rice cakes also go well with tsokolate. So good!)

Jump To hide
What is suman?
What are the different types of suman?
How to make
Ingredients
Tools
How to wrap in banana leaves
Frequently asked questions
Other delicious Filipino recipes
Suman Malagkit (Filipino Sticky Rice Cake Recipe)

Asians (and I think Filipinos, especially) love rice. We eat it for breakfast, lunch and dinner. We make rice desserts and snacks. We just can’t get enough of it!

I grew up eating it after mass and at my grandparents house as a special treat.

Restaurants would later realize its national significance and began serving it plated all fancy with special sauces and toppings.

Simple is always best though and this is what this recipe is all about. Classic and traditional.

So if you miss the suman from Antipolo or grew up eating suman Tagalog like me, you will absolutely love this.

Suman is a rice cake made from glutinous rice cooked in coconut milk (gata) until al dente. They are then wrapped in banana leaves and steamed until fully cooked and sticky.

Depending on the kind you’re making, it’s usually eaten sprinkled with sugar, dipped in chocolate, with ripe mango, or on its own.

What are the different types of suman?

The Philippines is a country that’s composed of more than 7,000 islands and there are different kinds of suman depending on which part of the country you’re from.

Making this delicious Filipino rice cake involves several steps but they are all easy ones. And the reward at the end is more than worth it.

1. PREP RICE. First you want to soak your glutinous rice in water for at least 2 hours. Soaking will make your suman fluffier and softer.

2. COOK RICE. Once that’s done, drain and transfer the rice to a pot with coconut milk, granulated sugar and salt. Bring this to a boil then lower heat to a simmer. Stir often to prevent your rice from burning at the bottom. Cook until the rice has absorbed almost all of the liquid, about 10 to 15 minutes.

3. LET SIT. Remove the pot from heat and let it sit for another 10-15 minutes to allow the rice to cool.

4. PREP BANANA LEAVES. In the meantime, you can get your banana leaves ready.

We usually buy banana leaves frozen so once they are thawed, wash them thoroughly, dry them and cut them into rectangular shapes of equal sizes (I make mine roughly 7×8 inches).

To make them more pliable, heat the leaves over an open flame but be careful not to burn them.

If you have an electric stove, you can set your oven to low broil and place 1-2 leaves in the oven at a time for about 30 seconds then bring out.

5. WRAP RICE IN BANANA LEAVES. Put 2-3 heaping tablespoons of rice in each banana leaf and roll tightly. Seal by folding the edges. Tie with a banana leaf “string” to keep the banana leaf in place (scroll below for step-by-step photos).

6. STEAM. Place your suman in a steamer and steam for about an hour to allow the rice to fully cook. Remove from steamer and allow to cool and dry slightly before unwrapping.

We can usually find all these ingredients in an Asian supermarket though a lot of our local grocery stores carry them as well now. You can find coconut milk in the Asian aisle and the banana leaves in the frozen section.

) but if you don’t have one, there are hacks you can try. Like this one.

In addition to a steamer, you just need a pot, something to stir the rice with (we prefer a wooden spoon) and kitchen scissors to cut the banana leaves with.

How to wrap in banana leaves

Suman is very aromatic because of the coconut milk and the banana leaves but they’re generally not very sweet because you’re meant to dip them in sugar, latik of coco jam or hot chocolate.

How to make suman without banana leaves

Sometimes my dad wouldn’t bother with them either and just steam the rice in little containers. You’ll miss out on that distinct smokey banana leaf flavour but your suman will still be delicious

How do you serve suman?

You can serve suman hot, cold or room temperature. You can serve them plain or topped with sugar, pinipig, toasted coconut, coco jam and even ube.

My parents and my grandparents like to fry it to make it crunchy outside and chewy inside and it’s really a great way to eat suman that’s close to getting stale. Fried suman is delicious!

Suman is best kept in the fridge because of the coconut milk. It should be good up to a week. After that, it starts to dry up. Which makes them perfect candidates for frying (see above).

To best way to reheat suman is to re-steam them until warmed through. You can also just as easily microwave it for a minute.

This recipe is not overly sweet. It’s perfect with mangoes or hot chocolate. You can also dip it in sugar if you like.

However you want to enjoy them, suman is delicious! They always make an appearance in special occasions like Christmas Eve (Noche Buena) and New Year’s Eve (Media Noche).

Everybody loves them; hope you do too.

Filipino recipes are simple but so delicious. Give it a try! 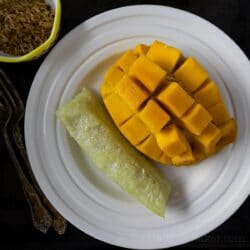 Did you make this Filipino sticky rice cake recipe? I’d love to hear from you in the comments section below.