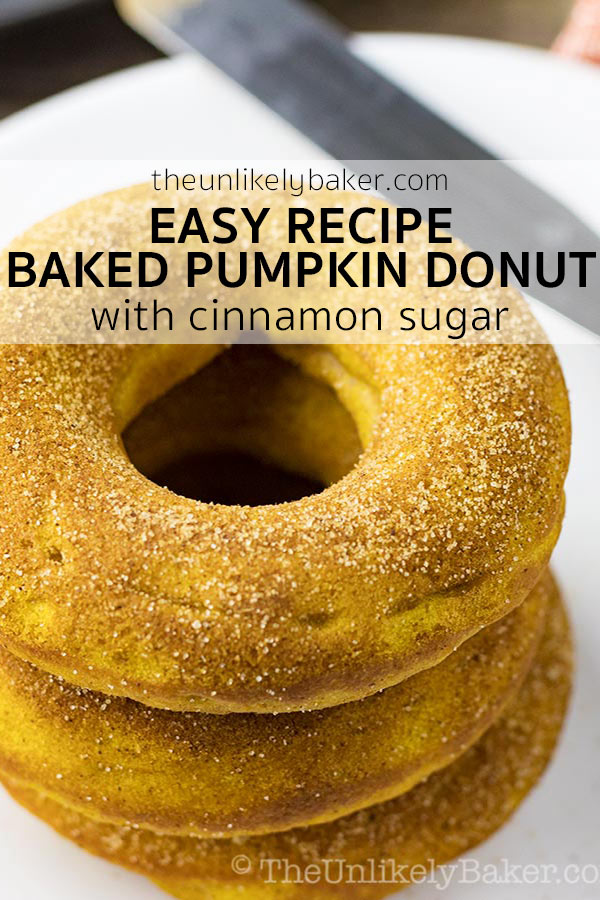 Baked pumpkin donuts with cinnamon sugar that are soft, tender, delicious and so easy to make. You’d want to enjoy them with your coffee or tea all season long.

Filled with fall favourites like cinnamon, nutmeg and ginger, plus a generous helping of pumpkin puree, they go perfectly with coffee or tea on a crisp fall day. You’d be surprised how they come together so easily too!

Baked donuts are also called cake donuts because, unlike traditional donuts, they are baked and cake-like, not fried and airy. And that’s really the main difference between the two.

But if you want to get really technical about it – a cake donut is made with a sweetened batter usually with baking powder to help it rise. It’s firmer and often soft and cake-like, like these pumpkin donuts.

It’s made with a yeast dough then cut into shape before deep frying. They’re light and airy, have a slight chew and yeast flavour.

What is better – cake donuts or yeast donuts?

So what is the better donut? It’s really a matter of preference.

Some people like that yeast donuts are airy but others don’t like the fact that they’re fried (though some cake donuts can be fried too).

Cake donut fans like the fact that cake donuts are baked and more filling while non-fans miss the light texture of a yeast donut.

I personally like all donuts (I’m not picky lol). I think the more important question is, is it donut or doughnut?! (I went with the simpler route, donut).

How to make cake donuts without a donut pan

I was inspired by my friend Dawn over at Girl Heart Food (she has some amazing donut recipes) to start experimenting with donuts. It took me longer than expected to start though because I didn’t own donut pans.

I did eventually buy some since I baked donuts a lot but you don’t have to. Don’t let not owning donut pans stop you from making donuts at home!

I found these two really clever hacks for you:

How to make baked pumpkin donuts

Once we’ve addressed the donut pan situation, we can get on with baking! And it cannot get easier than this.

You don’t even need a mixer. In fact, as a general rule, cake donut batters should be mixed minimally to ensure tenderness so mixing by hand is preferable.

Make sure to mix thoroughly though. Ensure there are no patches of flour remaining in the batter.

So scrape the bowl to make sure your ingredients are combined well, but avoid over-mixing, which can make the batter tough. Gentle but thorough does it.

You then have a choice of scooping your batter into the pan or piping them. I like to pipe them – I find it’s less messy that way (check out the video). Don’t have piping bags? Just get a large Ziploc bag and cut off one tip.

How to make cinnamon sugar

Can we take a moment to talk about cinnamon sugar? So simple, but so good! Who knew mixing sugar with a little bit of cinnamon can take your baked goods to the next level?

In addition to these baked pumpkin donuts, you can also sprinkle cinnamon sugar in cakes, cupcakes and even your favourite lattes.

I’m convinced the perfect ratio is ¼ cup sugar to 1 tablespoon of cinnamon, which was what I used in this recipe.

Related: How to Make Churros con Chocolate at Home

I’m not entirely sure how to categorize donuts. I eat them for breakfast, snack and the occasional dinner lol! But I suppose a lot of people have them in the morning.

In which case, these cinnamon sugar baked pumpkin donuts would be perfect on Thanksgiving morning. Nothing beats waking up to the smell of these baking in the oven!

Here are more Thanksgiving breakfast ideas for you:

Pumpkin pecan muffins are a delicious way to start the day! With bits of crunchy pecans mixed in with the batter and a delightful pecan streusel topping, it’s a muffin especially made for a lovely fall morning.

Reward yourself with breakfast that tastes like dessert! Slightly boozy too. What more can we ask for? Chocolate kahlua bread pudding is bursting with chocolate flavour and a truly special morning treat.

Sweet potato breakfast hash is delicious and filling. And with all the best things about breakfast – potatoes, sausages, bacon and eggs – in one pan, it’s a great way to start your day! 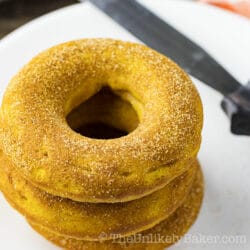 For the Baked Pumpkin Donuts

For the Cinnamon Sugar

Did you make baked pumpkin donuts? I’d love to hear from you in the comments section below.